Our new indicator, the CROWD CAPITAL INDICATOR, serves to measure Hungarian community pledges that aim to compensate or decrease the negative effects of the pandemic Covid-19. We started a mini interview series with the donors about their pledges. The 26th volume of the series features Judit Szűcs, the Public Affairs and Communication Lead at Coca-Cola Hungary.

The Coca-Cola company and the Coca-Cola Foundation donated 120 million dollars globally to the communities that have been most severely hit by the crisis. In Hungary, they supported the work of the Hungarian Red Cross with a donation of 65 million forints, in order to help in those areas where it is the most needed. Additionally, they pledged all their advertising spaces to the organization. In June they have launched a new campaign that intends to help the hospitality sector, which has been severely hit by the shutdown that lasted for numerous months. 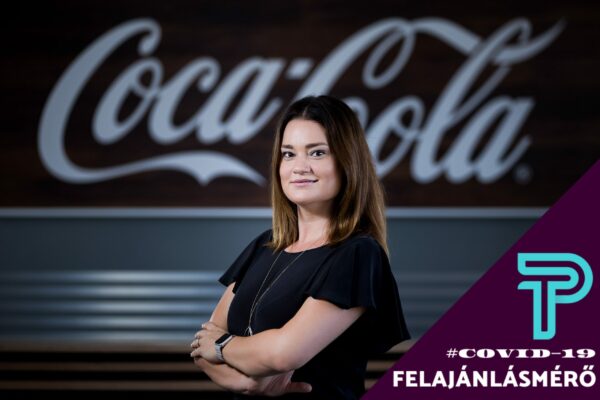 How could you help during the last few months?

It has always been important to Coca-Cola to help the people in need and to stand for social values. During the first phase of the coronavirus crisis we had to spread messages about health and security to an audience as wide as possible and to support those who have been most severely hit. Our joint initiative with the Hungarian Red Cross titled „Help instead of ads” facilitated the above goals.

The global foundation of our company donated 65 million forints to support people in a difficult social situation, including the residents of the 10 Temporary Homes of Families operated by the Hungarian Red Cross and that of 75 homeless shelters, the elderly, the unemployed and those in quarantine – primarily with food, hygiene products and by psychosocial support. Moreover, the contribution facilitated the expansion of the cooperation with the National Ambulance Service and with hospitals. We discussed with the Red Cross, how we could help the most in the given situation: by providing communication channels to spread important information and messages to as many people as possible.

Besides the tangible pledges and drinks, we established a new collaboration with our bottling partner, the Coca-Cola Hellenic Bottling Company. Five regional coordinators joined the Hungarian Red Cross with company cars to transport the donations from the regional warehouses to the targets: underprivileged families, homeless shelters, mother’s homes and even to hospitals. Further 16 regional coordinators volunteered to contribute to the work of the charitable organisation beyond their working hours.

What kind of effect do you expect the campaign will have?

We hoped that by providing our advertising spaces we can help spreading the most important messages and information quickly and efficiently and we believe it worked. The employees of the charitable organisation have been partly relieved by the resources of Coca-Cola, which enabled them to devote more energy to the promotion of blood donation and social assistance. Moreover, through the Coca-Cola community a lot of people who previously haven’t heard much about the organisation, finally got to know their work. The Hungarian Red Cross is a humanitarian social organisation with one of the largest network and experience; their colleagues and volunteers can help where and how it is the most needed – that is why we have been cooperating with them in various forms for years.

What do you consider the most important when fighting against the pandemic and the crisis?

It was very important to transmit important information and useful advice – e.g. about physical and mental health – to as many people as possible. Handing over our advertising spaces and channels helped the Hungarian Red Cross to multiply the number of recipients through various channels. Our goal was to help people stay safe and healthy!

How many people have you helped in total?

10 of the Temporary Homes of Families and 75 homeless shelters received donations through the Hungarian Red Cross. In addition, we and our bottling partner provided nearly 20 hospitals and several aid organizations with mineral water, juice and soft drinks in the total volume of nearly 75,000 bottles.

Was it only the Coca-Cola brand participating in your actions?

We shared important messages on the Facebook accounts of Coca-Cola, Cappy, FUZETEA, NaturAqua, Fanta and Kinley, with the aim to help as many people as possible pull through this difficult period.

What was your goal with the poster campaign titled „Where are you heading?”

We posted large posters with the logo of the Hungarian Red Cross on the inside of portals of block of flats. The purpose of the posters was to make the residents of the apartment voluntarily inscribe their names, phone numbers as well as activities in which they are willing to help the elderly residents of the apartment: shopping, taking over medicine, walking the dog and various other important activities.

What is your current campaign about?

Our current campaign aims to help restaurants and bars, since these have been particularly severely hit during the last few months as their revenues dropped drastically. The severeness of the situation is also shown by the Hungarian statistics of our company: the consumption stopped at nearly ¾ of our partners that used to buy our products to supply immediate consumption. More than 8200 restaurants, snack bars, drink bars, hotels and guesthouses haven’t ordered any drinks for two months due to the absence of consumers.

As the restrictions have been lifted, the closed doors opened and the patios have been filled with people as the guests are finally allowed to return. Coca-Cola wants to support that!

On 19th June the guests received free bottles of Coca-Cola. What was your goal with this offer?

Our country-wide special offer on the 19th June provided the guests of our partners in Budapest and in many other big cities with more than 100,000 bottles of free Coca-Cola drinks in the total value of 50 million forints. Our goal with this offer was to reconnect the consumers with their favourite restaurants after the quarantine.

Overview of crowdfunding providers’ own campaigns
2022-02-15